Describing the Foehn Effect is quite simple but how it effects our little island is a lot more complex than it would seem at first glance.

To put it simply, The Foehn Effect is a dry and relatively warm wind that blows down the leeward side of large hills and mountains. 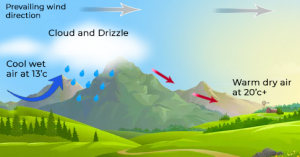 Why is it only on the leeward side though?
When a moist airflow comes across a large hill or mountain, the air is forced to rise up and over that hill, and as it rises it becomes cooler. Cooler air however cannot contain as much moisture as warmer air, so the moisture condenses into clouds and sometimes rain, depositing the moisture on the windward side, so by the time the air reaches the other side of the mountain, not only is it drier, but as it sinks it becomes warmer too, this is because the process of condensation on the windward side actually leads to an increase in temperature of the airmass, also dry air can warm much more quickly than moist air, this means that any surface heating by the sun on the leeward side can lead to large temperature variations on either side of the hill/mountain.

We have no mountains on the Isle of Wight, so how can this effect us?
Our island has a very undulating landscape, some of the hills reach close to 800ft (although not quite) and this is enough to produce a Foehn Effect on a small scale.

Shanklin is one of the more notable areas we can see this effect, especially during spring and early summer.
When a warm, moist southerly airflow is pushing across southern England during this time, the island often feels rather chilly, this is because the English Channel takes some time to warm up after the winter months.
So lets say there is a moderate southerly breeze, its 13’c along the southern coast of the island (channel cooled) and 18’c in more central and northern parts of the island (moderately land heated). Shanklin would likely exceed 20’c, this is because the wind is being forced up over Ventnor down, St Boniface Down and Shanklin down. The forcing often produces low cloud, hill fog and drizzle, and by doing so deposits its moisture, although places to the lee of those downs would likely see the cloud break up and the drier air warms significantly and gives Shanklin and the local surrounding area a fine, warm day.