8th Feb 2019
As most of you are aware, the next 24 hours will see some severe weather at times. The wind gusts will be very strong indeed, starting off as a south to southwesterly tomorrow morning but turning round gradually into the west to southwest later in the day.

The winds will start to impact the island between 4am and 6am with gusts already approaching 70mph. As we move through the morning the winds will increase further so that by 11am we will really start to see some severe gusts moving through. 70mph gusts will be widespread across the island with gusts of 80mph very likely in more exposed locations. A few spots may even see winds up to 90mph such as Ventnor Down, St Boniface Down, St Catherine’s Down, Brighstone Down, Compton Down, Tennyson Down and Culver Down. The Needles will likely see gusts in excess of 90mph with 100mph not totally out of the question here.  These extremely strong gusts will last until late afternoon with current projections showing that between 16:00 and 17:00 we will start to see a gradual reduction in wind strength, although 60-70mph gusts are still possible in places up until midnight.

The islands coasts will also be impacted by some gigantic waves with places such as Freshwater Bay, Niton (Castlehaven) Steephill Cove, Ventnor and Bonchurch seeing large over-topping waves with spray, sand, shingle and seaweed being thrown onto walkways and roads. 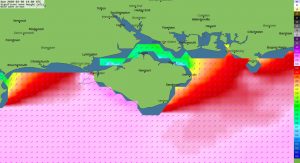 The east coast of the island will also see some very large waves with moderate over-topping from Shanklin beach to Sandown beach with the promenade between the two being most significantly affected, especially in the Lake area. Whitecliff Bay through to Forelands will also see large waves over-topping the walls and defenses. The same goes for places such as Totland Bay and Colwell Bay.

Further round towards Bembridge and Ryde will see some moderate size waves and a little over-topping but only fairly minor here. Cowes through to Gurnard will be much the same.

The flood risk due to storm surge will be rather low, although some minor flood water may affect Cowes, Gurnard, East Cowes and Newport but we aren’t expecting any significant flooding and only very minor breaching is expected if at all.

We will continue with updates throughout the day.